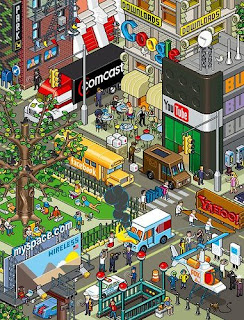 The news consumer, to borrow a phrase, has never had it so good. Initially, the Internet’s phase Web 1.0 allowed us to multi-source news by foraging among media outlets from town to country, from print to broadcast, for nothing more than a few clicks on a mouse. Then along came its sequel – ‘interactive’ Web 2.0 – bringing the opportunity not just of browsing, but of being browsed. We the consumer now had the tools to create and share our news and opinions on platforms such as blogs and Wikis, as well as on video-sharing and social-networking sites like Youtube, Twitter and Facebook.
Great news for most, but what exactly have these changes meant for journalists? Well, I’ve recently started studying journalism at the University of Cardiff and, like any working journalist, have been assigned my patch. Of course, my research began scanning websites and search engines but has gradually branched into territories previously unknown: I’m now finding my bearings in a new world of RSS feeding, book-marking, twitter-following and now, blogging. In fact, Web 2.0 networks provide an extension of my patch on the ground, a vital source to be kept close, consulted and worked upon.
So Web 2.0 is broadening the scope for journalists looking to generate and refine their stories. Passive media consumption is a thing of the past. Through web pages such as the Guardian’s ‘Comment is Free’ or the BBC’s ‘Have Your Say’, the public can now communicate their views and expertise to the audience, and to the reporter.
And so we can start to see journalism as being ‘a process, not a product’. These are the words of David Cohn, a journalist making his career developing the very practice of open source journalism. This intimacy between reporters and their audience creates a two-way process that makes journalists set their stories free. The final copy is now nothing of the sort. Audience feedback and exchange force the journalist to really listen and, in turn, to do a better job. As the Guardian’s Emily Bell explains, such collaboration can bring to a story the depth of ‘insider knowledge, with an outsider’s perspective’.
For Jeff Jarvis, the changing relationship that a journalist has with the audience and with the story should not mean 'surrendering control of the process'. Specifically, he suggests the journalist act as 'curator' so that dogmatic or offensive posts are simply edited out. In his words, we must figure out 'who the smart people are'. And perhaps he's right. Why shouldn't we oust those who use such platforms to rant, and make way for opinion that moves the debate along?
Or maybe the way forward is to educate the contributing audience à Le Monde. The French newspaper is confronting the online problem in a different way. They are appointing an editorial 'coach' to improve the standards of their contributors' postings.
Whichever line you take it is clear that the journalist's role hasn't actually changed so very much. It is still their job to filter information, in this case from forum feeds and blogs, and then to select the most significant aspects they find to inform their work. After all, we cannot assume that the unheard and silent majority not sharing their views online are any less engaged with the issues than those who are.
Posted by Charlotte Turner at 06:58

You've hit on a lot of the key issues that we'll be looking at across this module, and some of the interesting people who are talking about them.

These are important issues that journalists need to understand, there is a lot of change happening.

Just another pointer, your Web 2.0 patch will help you to get in touch with different voices for your World 1.0 patch - these things are not exclusive.

By becoming part of networks you can find geographical communities and communities of interest within them. Think of the kind of groups that are out there and what they can offer, and what you can give back in return.

This will build to impact on everything you do, whether you are publishing on or offline or both.