Cardiff is a city of shops. That, I remember, was one of my first impressions of the Welsh capital when I moved here last October. It seemed shopping and being shopped at were primary activities that kept the local population busy. No matter what time of day, or whichever day of the week, the main pedestrianized drag of Queen Street or the various glass-fronted shopping malls that led off it would be awash with people; shoppers bearing their bags, having a pause at the nearest café, before setting off on round two. It wasn’t till a few days later that I discovered some very special parts of the city that put its retail profile today in an historical perspective. Cardiff was not a city of shops after all. More accurately put, it was one of arcades.

In total, there are 12 arcades in the city’s centre ranging from Royal Arcade, the oldest, built 150 years ago in 1858, to the very newest, St David’s 2 (pictured below) due to open its doors later this year in September.


For most visitors to Cardiff, myself included, it is the older, harder-to-find historic arcades that capture the imagination with their old-age charm, stylish architecture and independent shops. In fact, these arcades of the late 1800s and early 1900s are integral to the character of the city. For many they are monuments preserving the pride of an era that saw the region flourish on the profits from the mines. For others, they are part of what makes Cardiff unique: the city boasts the highest concentration of Victorian and Edwardian shopping arcades in the UK. I've pinpointed the six oldest ones and the busy central indoor market on this satellite map.

Unfortunately, recent events may be putting the arcades’ future in jeopardy. The impending St David's 2 development, a plan to prevent car access to St Mary’s Street (a road that many arcades open out onto) and, of course, the looming economic recession mean many shops they house are facing tougher times than ever before. Nick Turner and his family have run the Digital Camera Centre from the Morgan Arcade for 35 years. Without a thriving online business running alongside the traditional shop, he says they would not have survived so long. He doesn’t know how neighbouring businesses not exploiting the Internet can afford to keep afloat. In the coming months he says, ‘ I wouldn’t be surprised if ten percent of the shops in the arcade closed down.’

With similar sentiments is Andrew Mitchell, owner of Capital Books (captured in the picture below), a second-hand bookshop in the neighbouring Royal Arcade. 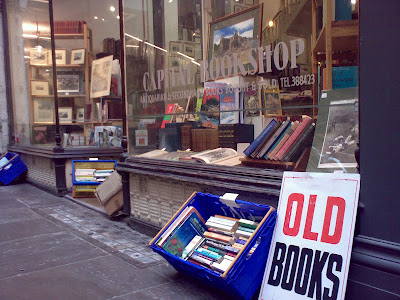 While surviving 25 years in the arcade, he has witnessed many newer shops come and go, crippled by rising rents and the drop in passing trade. Partly to blame for this, he claims, is the ongoing pedestrianization of St Mary’s Street, which has turned people away from that entrance to the arcade as well as the lack of vehicle access on the other side of the arcade due to building works on the St David’s 2 shopping centre on The Hayes.
The saddest loss for many has been the demise of Woodies, a 112 year-old men’s clothing emporium that closed its doors last December. Its disappearance came just months after owner Ray Beacon commented on the dramatic loss of trade due to St Mary’s street plans. A second branch in Bristol closed too: immediately after the new Broadmead Shopping Centre opened in the town centre, trade for the independent business dwindled by a half.

While the St David’s 2 development may carry similar risks to Cardiff’s arcades' smaller, independent stores, most owners are holding out in the hope the centre will attract enough new trade to the city that there'll be benefits for all. Added to this are local people's sentiments about the arcades which might serve to protect them for the future. As David Hughes-Lewis, owner of Jonathan David Jewellers in Morgan Arcade, says, ‘the arcades are the heart of Cardiff and nobody wants to see that heart ripped out’.
A place in time

In the light of the St David's 2 development, local artist Jennie Savage is embarking on "The Arcades Project: a 3D documentary." By inviting participation from shopkeepers and customers of the historical arcades and the central market she hopes to draw on local knowledge to create archives and insights into the life and times of the spaces held within the architecture of the arcades. The project is inspired by a study of Parisian arcades in the 1920s by Walter Benjamin. He considered the arcades to be 'the most important architectural form of the 19th century'. Perhaps through bearing witness to their past, through photographs, interviews and oral histories, this project might act to secure a place and a meaning for the arcades in the future.
For more about what inspired Jennie's project please click on the audio link below.
Posted by Charlotte Turner at 11:33

i have gone through this blog. nowadays im working from my home as a online businessman. and the above blog is really helpful.